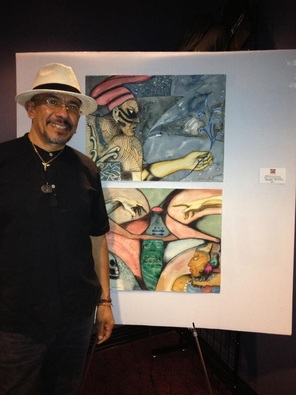 Was born on July 9, 1957 in Morelia, Michoacan State, Mexico. Graduated from the national School of Painting, Sculpture and Printmaking "La Esmeralda”.

He was initially drawn to the plastic arts from the works of the great Mexican muralists Rivera, Siqueiros and Orozco. When we look at his work today, it is clear that we are in the presence of a gifted artist whose inspiration draws strongly on the pre-Colombian culture and images.

Roberto’s works have been shown in Spain, Canada (Montreal, Toronto), United States (New York, Chicago) as well as in his own country. His works have also appeared in many art magazines from Mexico and other countries.

He is also the founder of Nahui Ollin, a group of a spiritual dancers called “Concheros” or Aztec dancers and member of the musical troupe “Tarima Son” dedicated to play afro-carribbean Mexican music. He graduated from the national School of Painting, Sculpture and Printmaking "La Esmeralda". Roberto Ferreyra, a Mexican painter and musician who actively works to contribute his artistic talents to the Chicago community. Roberto’s bio is attached. He is co-founder of Colibri Gallery in Pilsen.

Ferreyra has been an active artist and educator in Mexico as well as Chicago working with different organizations implementing art in the schools like a tool for teachers and students to understand and compliment the curriculum.